The early release data policy applies to all measurements in the core program for repeat hydrography, including both Levels 1 and 2 (see core measurements).

Within 5 weeks of the cruise, released to the relevant data management structure: 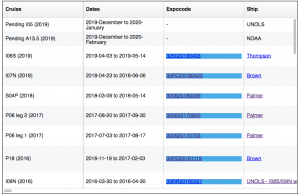 Within 6 months of the cruise, presuming the 5-week release of CTD and discrete salinity data:

Within 6 months of shore-based analysis: